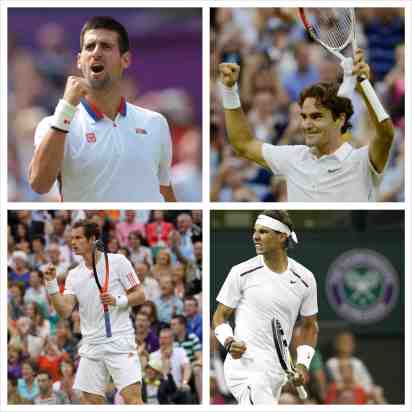 Novak Djokovic has the epitome of perfect set up and finish technique on both his forehand and two handed backhand. Its textbook. His preparation is early and he uses his shoulders to complete his unit turn, his contact is in front of his body and he finishes his strokes with complete rotation of the upper body. There is no better player to emulate (with a two handed backhand) than Novak Djokovic.

Another master of technique, Federer is arguably the most complete player to ever play the game. Its very hard to emulate Federer’s elegant style and the effortless motion in which he strikes the ball. However there are 2 things Federer does better than most people through history that have paved the way for his success and you can improve these things with practice in your own game.

1) Ball toss and contact point for his first serve is practically identical. Federer’s flat and slice serves have no tell which makes his first serve very hard to read. Not only with direction but with spin (flat or slice).

2) Federer is the absolute best at the 3rd ball attack. Using his incredible disguise and placement on serve Federer sets up his next shot (usually a forehand) better than anyone. His quick footwork allows him to get around most balls fast and attack right off the bat. This is first strike tennis at its best. Players should work on taking control of the return if it comes back into play and using their serve to build an attack quickly. Federer is the best example of the 3rd ball attack.

Nadal has built his career on his amazing baseline game and one of the biggest forehands of all time. The racket head speed Nadal creates on both the forehand and backhand is impressive to say the least but what many people don’t see on tv is how extreme his net clearance is from behind the baseline. Nadal has the highest net clearance of the big 4 and he uses this to keep his ball heavy and deep, pushing his opponent well behind the baseline and setting himself up for big inside in and inside out forehands. The topspin he creates not only pushes the opponents back but also enables his to generate angles for winners and forced errors once he gets the short ball. Giving yourself more height on the net and increasing topspin will keep your ball deeper and have it bouncing up out of your opponents strike zone creating short balls and errors from your opponents.

Andy Murray is a return of serve machine, his anticipation and ability to neutralize his opponents best weapon makes him a nightmare for players who rely on free points. Murray makes every opponent earn every service point. What makes his return so good can be majorly attributed to his movement before the opponents contact and his compact swings. Murray takes a big step forward with his right foot as the opponent releases the ball toss. This gets his momentum moving forward ready to cut of the servers angle. He uses that right step to hop forward into a split step right as the opponent contacts the serve, this allows him to react fast and push off in the direction of the ball instantly. Using this forward momentum return technique will help you neutralize players with big serves and cutting angles. Just make sure to use compact swings and watch out for the body serve.

See you on the courts!