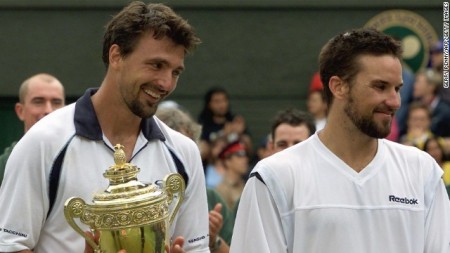 There is no substitute for pre-match preparation. Practice, fitness, diet, equipment and scouting are all crucial to a competitive tennis players success, and although management of these pre match factors are common, players often neglect two of the most vital components of match success.

Obviously, if you don’t put the work in before the match, you wont see the best possible results, but ultimately the match is the make or break event for the player. Pre match factors play a big role in preparing the player to perform at their very best, but once the match starts there are only 2 things that a player has control over. Their serve and attitude.

The serve is hands down the single most important stroke for a tennis player. It is the only shot in the game where you don’t have to react to a ball hit by your opponent. Assuming you can target the forehand and backhand side of each service box, you have control over how the point begins. You can then start to build a point designed around the placement of your serve. If your opponent has a weaker wing, target that. If your opponent is a great returner, you will have to mix up the pace, spin, and location more. A well placed flat or slice body serve will have your opponent guessing and keep you on top in the point from the first ball.

Second serve management is also very important. Every tennis player knows what it feels like to struggle with a low first serve percentage and double faults, but if you manage your serve better as a whole you can minimize doubles and stay in control. Players tend the think about their first and second serves in almost polar opposites. They either tee off on the first serve, hoping for a free point, or they push the first serve in so they don’t have to hit a second. I believe that while the first serve should always be on the more aggressive side, it doesn’t necessarily have to have extreme pace. If you find yourself struggling to get an aggressive first serve in play, change up the pace and use more spin, but keep your focus on the placement. Often by slowing it down a little bit you will bring the rhythm back and be able to bring back your faster serve. Avoid pushing the first serve in. All you’re doing here is giving the opponent rhythm and giving them the option to attack you first in the point. If you think of your serve more strategically you will manage it better and keep the returner on their toes. If your serve isn’t where it needs to be, practice. On the court, stay in control of your serve and your results will improve.

Champions however accept that let cords happen in tennis and avert their attention back to the game plan. Weak competitors let one moment, like a net cord, or a cheating opponent, or the wind, or their equipment etc. affect many points and subsequently allow matches that were still winnable to slip away. When asked why they lost the match these players will undoubtedly blame any or all of the above factors. Your attitude in matches can be improved, but you have to be aware of whats happening during the match. Its easy to let your emotions take control over you and to react negatively. Champions however accept the challenge and refocus on the goal, no matter what the obstacle.

Before you compete in your next match prepare yourself to deal with the wind, or the cheat, or the “pusher”. Think about how you are going to manage yourself when an obstacles arise (and they will!). This will assist you in re focusing on the game plan when it happens. This is what tough competitors do. Remember: Its tough to beat someone who never quits. Rarely does a tennis match go completely to plan, so make a concerted effort to improve your attitude on court and you will win more matches and tournaments. All without hitting a single ball!

See you on the courts,